What these datings show:

(taken from: Francois Deroche, Christian Julien Robin and Michel Zink (ed.), The Origins of the Koran, Proceedings of the International Symposium organized by the Academy of Inscriptions and Belles Lettres and the Berlin-Brandenburgische Akademie der Wissenschaften on March 3 and 4, 2011, Paris, AIBL, 2015, 314 p. ISBN 978-2-87754-321-7)

GRAPH OF THE CARBON DATES 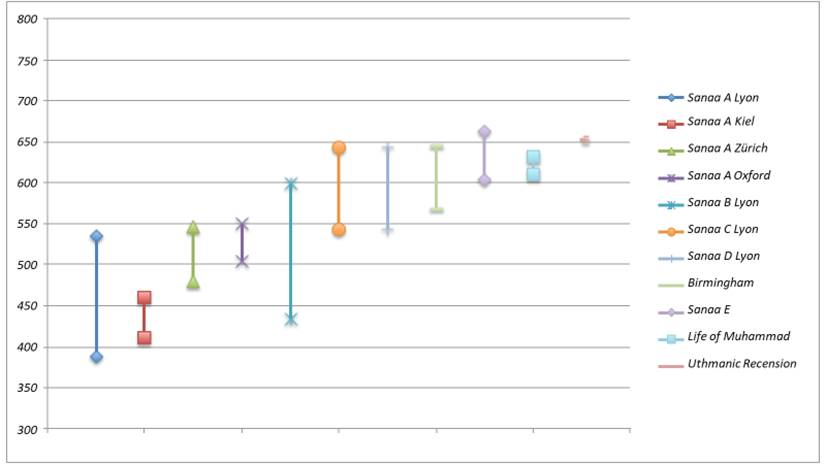 ‧       Four of the datings are from four different labs, but date the same manuscript page (i.e. the Sana’a A)

‧       Note that these have 95% probability ranges. When using the ‘Bell curve’ we know that the highest probabilities are nearer the center of the bars, and not the ends (which goes against what our Muslim friends have been saying)

‧       The Birmingham folios were dated in Oxford

‧       All the folios, including the Sana’a A, B, C, D, and the Birmingham folios (except for E) pre-date the Uthmanic recension

There is something seriously wrong here

1)      There is something wrong with the carbon dating

b)      or the standardization is incorrect!!

3)      The traditional dating of the Qur'an is wrong, and the Qur'an was really created much earlier, sometime around 450-500 AD, and the Muhammad story was then attached to it much later

I agree that this graph is indeed disturbing, because:

‧       There is possibly a problem with carbon dating, due to its inaccuracies (thus, I agree with point A)

‧       Due to the expensive nature of animal skins, it is highly unlikely that these many skins were stored for a long time before their use (thus no to point B)

‧       The traditional dating of the Qur’an is probably at fault, because

‧       It comes to us from the 9th century, which is simply too late to be credible

‧       Since Muhammad is not listed in the earliest dated folios, this suggests that the Qur’an is copied from borrowed material which would naturally predate Muhammad, the Qur’an, and thus Islam

‧            The RC14 dating of the Sana’a A, B, C, D and Birmingham folios suggest that these texts are much earlier than was previously considered

Since all four Sana’a A examples, dated at four laboratories, completely pre-date Muhammad, the Qur’an, and Islam, these must be earlier Arabic writings, from which the writers of the later Qur’an borrowed

Therefore, they all predate when the Qur’an was purportedly written down (i.e. 652 AD), proving why they do not agree with today’s Qur’an

But, what about the Arabic Qur’an we do have today? Is it uniform?

Visitors:
Copyright 2002-2011 @ www.ysljdj.com. All rights reserved.
All forms of copying other than for private use should get written permission from the copyright owner
版权所有，除作私人用途外，转载需得到作者的书面许可。